Which journalists write the most ‘unsafe’ articles?

A previous Adalytics post discussed how tens of thousands of articles on the New York Times, Wall Street Journal, Forbes, and CNBC websites appear to be marked as ‘unsafe’ by brand safety ad tech vendors. The post documented that those brand safety values appear to be utilized in ad auctions and ad server requests, meaning they could potentially be affecting news publishers’ ad revenues.

Earlier this year, journalists at a hedge-fund owned California newspaper declared they were fighting an effort to tie performance reviews based on the “the popularity of their stories as measured by clicks.” Most major news publishers retain a long-standing separation between the revenue and editorial departments of their organizations. However, the mere possibility that ad revenue could in some rare instances bias managerial decisions warrants a further investigation into the factors that may influence the monetary value of a journalist’s content. This analysis focuses on how content from individual journalists and contributors at The New York Times (NYT), Wall Street Journal (WSJ), CNBC, and Forbes are categorized as safe or unsafe by ad tech vendors. Notably, a number of war correspondents and Pulitzer Prize winners have more than two thirds of their news articles marked as ‘unsafe’ for certain digital ads to display on. Nicholas Kristof, a double Pulitzer Prize winner who frequently advocates for human rights, has over 300 of his NYT articles (60.5%) labeled as brand unsafe.

A previous exploratory analysis of 22,722 recent New York Times articles revealed that 30.3% appeared to be labeled as unsafe by Οracle Grapeshοt. In this analysis, a more comprehensive dataset of 332,710 nytimes.com articles from 2015 to 2020 was assembled. For each of these articles that used Javascript code from Grapeshοt, a given page was considered to be ‘safe’ if it contained the term ‘gv_safe’ (based on information released in Grapeshοt’s documentation), and ‘unsafe’ if it included any labels such as ‘gv_crime’, ‘gv_adult’ or other unsafe categories. A large number (but not all) articles contained clearly labeled ‘author’ meta tags and ‘section’ meta tags that could be used to group articles.

The table below indicates which New York Times journalists and contributors had the largest proportion of their content labeled as ‘unsafe’.

Additionally, it’s clear that certain sections of the New York Times are disproportionately likely to be labeled as ‘unsafe’. For example, 79.3% articles in the "Obituaries" section and 53.2% articles in the “World” section are labeled as unsafe. This is likely due to the fact that journalists often have to use keywords related to "death" when covering such topics, which may automatically trigger a negative classification.

As discussed in the previous analysis, the Wall Street Journal (as well as other News Corp owned web properties) appear to be using brand safety technology provided by Οracle’s Mοat division and Cοmscοre. The two vendors provide labels which appear to be incorporated into network requests to ad auctions and header bidding services.

Based on an analysis of 30,033 wsj.com pages, it appears that a number of journalists have more than 90% of their work labeled as ‘unsafe’ by either Mοat or Cοmscοre. Zusha Elison, who covers various gun and police related topics, had 92% of his articles labeled as “moat_unsafe” often due to “gv_arms” or “gv_death_injury”. Ben Chapman, who “covers criminal justice for The Wall Street Journal in New York”, had at least 104 of his articles marked as "moat_unsafe".

Katherine Clarke, who covers residential real estate, appears to have 74 out of 132 articles (56%) labeled as “brandsafe: unsafe” by Comscore.

There are a number of notable journalists, columnists, and writers who focus primarily on covering various advertising or digital marketing related topics. It appears that these writers are not exempt from having their content classified as “unsafe” by various vendors.

Megan Graham, a reporter who covers advertising and marketing for CNBC and previously worked at Ad Age, had 23 out of her cnbc.com 219 articles (11%) marked as “moat_unsafe”. 15 were unsafe due to “gv_death_injury”, 7 were marked as unsafe due to “gv_arms”, and 3 were marked as unsafe due to “gv_tobacco”. The cnbc.com website also appears to use semantic contextual intelligence technology from Admantx, a company that was acquired by Integral Ad Sciences (IAS) in 2019. The Admantx technology does not appear to have binary classifications for “safe” or “unsafe”, but rather, seems to allow individual advertisers to avoid showing their ads on webpages that contain individual keywords. This hypothesis is supported by the presence of what appear to be individual brands’ keyword lists in various Javascript network calls. 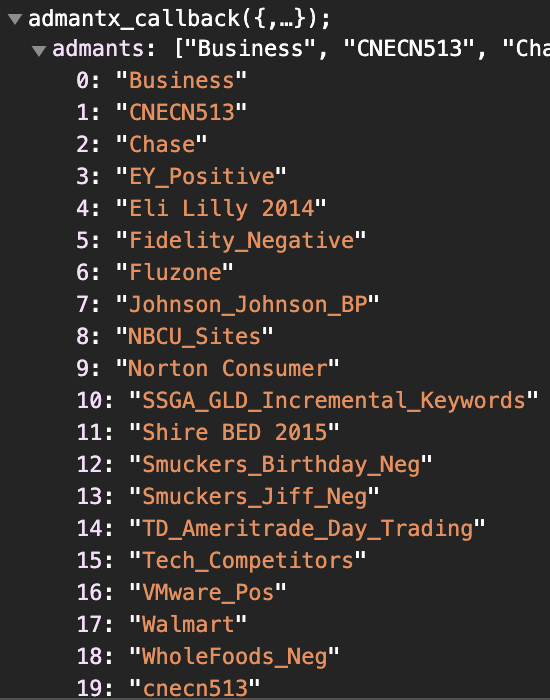 The presence of a string ending in “_Neg” or “_Negative” may indicate that a given brand is blocking their digital ads from rendering on a given webpage due to the presence of certain keywords in that context (i.e. “Fidelity_Negative” may indicate that Fidelity wants to avoid having their ads show on that specific webpage). In Megan Graham’s case, 132 of her 219 cnbc.com articles contain the label "Barclays_Negative2" in the admantx.com network response. For example, 202 out 219 of her cnbc.com articles contain the Admantx label 'ErnstYoung_Neg', which may indicate that the British professional services firm Ernst & Young want to avoid placing their ads on 92% of Graham’s articles because they consider them to be brand “unsafe”. Some of the keyword lists include interesting names, such as “IBM_JeffreyEpstein”, which appeared on 154 of Graham’s articles, or “FlexShares_Coronavirus” which appeared on 130 of her webpages.

Table illustrating which IAS Admantx category and keyword labels appear most frequently across CNBC reporter Megan Graham’s 219 articles. Some of these labels may correspond to brand specific keyword blocklists, which prevent a given brand’s digital ads from rendering on a given webpage. For example, the presence of “ErnstYoung_Neg” may indicate that the professional services firm Ernst & Young is blocking their ads from showing on 202 of Megan Graham’s CNBC articles due to presence of certain keywords on those pages.

Sheila Dang, an advertising-focused Reuters reporter, had 7 out of 193 of her articles labeled as "moat_unsafe". Her February article about how "Doritos take top spot in Super Bowl Ads" was categorized as "gv_arms" - this likely corresponds to a Oracle Data Cloud "avoidance category" which "avoids webpage textual content around guns and weapons". Another article from August, 2018 about how "CBS beats Wall Street estimates for quarterly revenue", was labeled as "moat_unsafe" due "gv_crime". This is likely a reference to an avoidance category about "sex and violent" crime segments.

Similarly to Megan Graham, many of Dang's articles also contain Admantx labels which may correspond to brand specific keyword exclusion lists. It appears that a large French luxury goods conglomerate may be blocking their ads from 75.1% of Dang's reuters.com articles. Several large software and banking corporations also appear to take issue with some keywords that appear on 60% of Dang's news pieces.

Table of IAS Admantx and Oracle Moat brand safety labels for 193 reuters.com articles by Shiela Dang. The table has three tabs. The first tab shows each individual article, and IAS Admantx labels were observed for that given article. Some of these may potentially correspond to client specific keyword exclusion lists. The second tab contains an aggregate summary of how many of Dang's articles contained a given label. The third tab includes data about which of Dang's Reuters articles were labeled as "moat_unsafe" and the associated avoidance categories.

Dr. Augustine Fou, a cybersecurity and anti-ad fraud consultant who previously taught digital marketing strategy at NYU, had posted 123 articles on Forbes’ CMO network section. Of these, 59 articles (48% of total) were marked as “moat_unsafe”, with 58 labeled as “gv_crime”, while one was labeled as unsafe due to “gv_adult”.

It appears that a large number of Hsu’s nytimes.com articles are labeled as containing hate speech (“gv_hatespeech”), or depicting or promoting crime, terrorism, or adult content (“gv_crime”, “gv_terrorism”, “gv_adult”, respectively). Additionally, a number of large brands, such as MasterCard (“neg_mastercard”), Chanel (“neg_chanel”), Google (“neg_google”) and Capital One (“neg_capitalone”) appear to be blocking their digital ads from web pages containing Hsu’s content.

Table illustrating which 121 of New York Times reporter Tiffany Hsu’s articles were labeled “unsafe” by Οracle Grapeshοt. The last column includes what appear to be company or brand specific blocklists (i.e. IBM may be blocking their digital ads from showing on a large number of her articles).

Shoshana Wodinsky, who covers consumer data for Gizmodo and used to cover adtech for AdWeek, had Double Verify or IAS brand safety swaps occurring in the ad slots on one of her recent articles about Amazon Web Services. This may occur when an advertiser wins a digital ad auction but brand safety technology detects that the given page the ad is about to load on is “unsafe”.

Screenshot illustrating how Integral Ad Science or Double Verify ‘swap out’ digital ads on a recent article written by Gizmodo journalist Shoshana Wodinsky. The image of tropical trees is a placeholder used by brand safety companies, as evidenced by the image source attribute.

Scott Galloway, a professor of marketing at New York University, once had a dinner discussion with Bill Keller, executive editor of the NYT. Professor Gallway wrote:

“At one point I had dinner with Bill Keller, executive editor at the time, who had to excuse himself to help negotiate the release of a Times journalist taken hostage by the Taliban. Our best and brightest were doing hostage negotiations while Google’s best were busy programming ways to steal and monetize the content of the hostage.”

While Professor Galloway’s characterization may strike some as dramatic, he raises an important point. Publishers, marketers, and software developers should strive to understand the software mechanics and ad tech algorithms which may affect the ability of publishers to monetize certain content. If journalists are willing to risk their lives covering war zones, society owes it to them to treat the fruits of their labors judiciously.