Why this ad? The lack of transparency in ad targeting

Do you ever see an ad and think to yourself “Why I am being shown this ad? This literally has nothing to do with me!” That's how I felt when I recently got an ad for luxury housing in Accra, Ghana while reading some news about the 2020 US election. 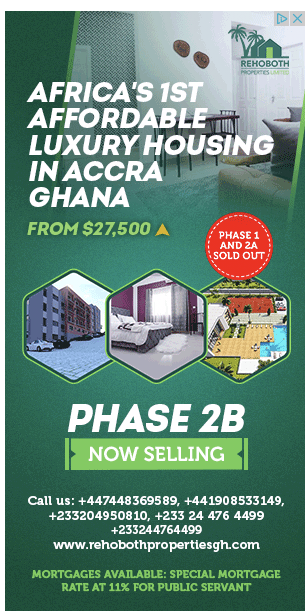 I have never been to Africa, but if I ever move there, I know where to look for housing!

Advertising done right gets the right ad to the right person at the right time. However, even in the age of contextual and behavioral targeting where advertisers can pay to target someone based on his or her age, gender, pregnancy status, income, occupation, or even whether he or she is interested in pseudoscience theories, users are often still receiving irrelevant ads.

So why the disconnect between the abundance of data being collected through our phones, apps, browsers, public records, social media, and the low quality of advertisement targeting?

It is quite common that someone browses a particular brand’s website for a minute, leaves, and then starts seeing that brand’s advertisements popping up all over the internet. Or alternatively, a person signs up for a store’s loyalty card or an airline’s frequent flier program to get discounts and rewards, and in the process leaves an email address. Same thing happens - the companies use that information in their advertising platform and start targeting that customer through their browser. In these cases, you can at least fathom why an advertiser decided to spend money to try to reach out to you again (a strategy commonly known as “retargeting”).

At other times, there’s no simple or rational explanation for why a specific ad appears in your browser.

There can be a number of reasons for these inexplicable ad placements:

Transparency in advertising targeting (or the lack thereof)

There have been various calls for increased transparency in advertising targeting in recent years, but the effort is far from complete. Google released an ‘AdChoices’ feature a few years ago that lets consumers click on an icon in the top right corner of an ad and see “Why this ad?”

However, in most cases, it is hard to get a good understanding of why a certain ad is being shown even after reviewing Google’s detailed explanations.

I recently conducted an experiment where I started browsing to different webpages in Chrome’s incognito mode (on a new IP address to be safe) and observed what ads were shown to me. When I went on Reddit and clicked on a random thread, I got an ad for the financial services company SmartAsset. 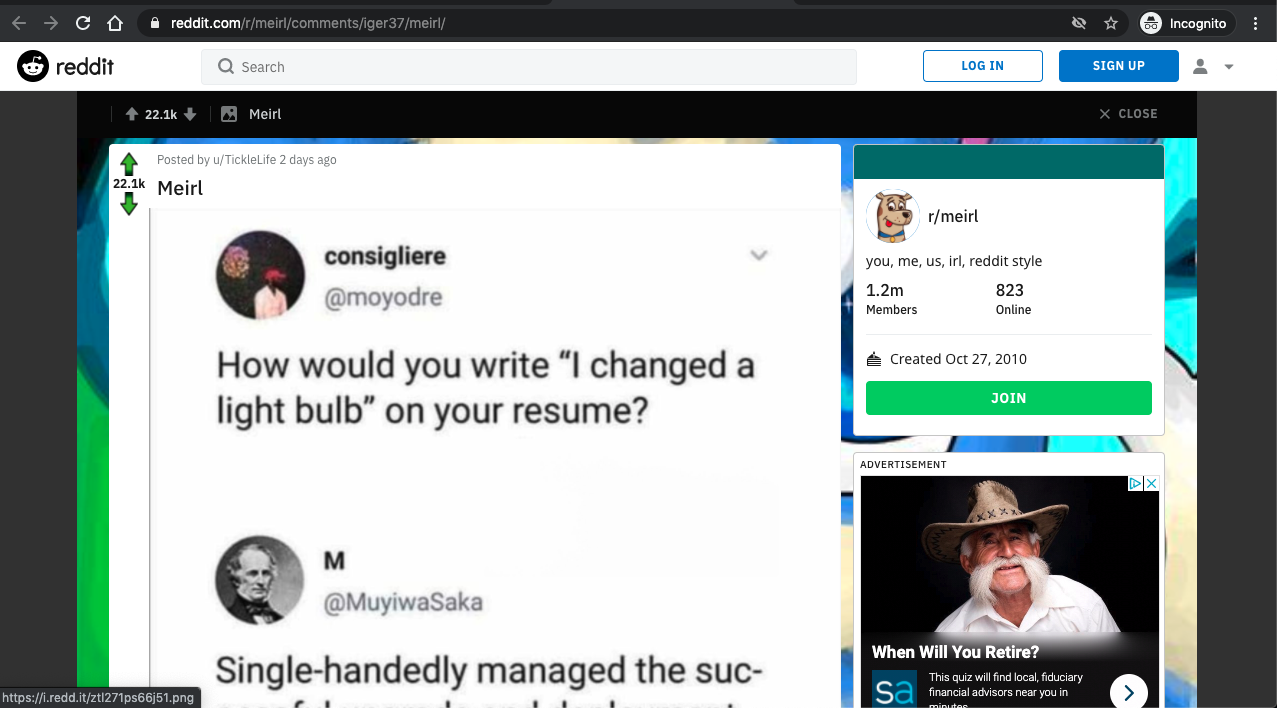 Note that I had never been on SmartAsset’s website before, nor had I searched for any financial services. I was not logged into any social media, email, or banking accounts on my browser and did not have any cookies present in this fresh browsing session. I clicked on the triangular “Why This Ad?” info modal in the top-right corner to see what was the reasoning behind this placement. 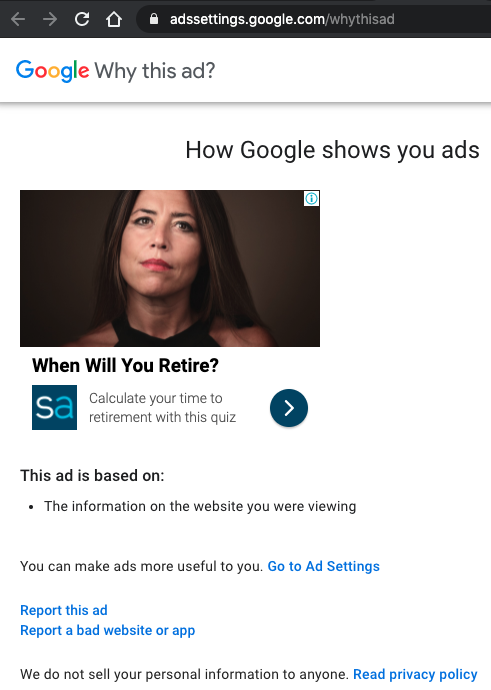 Google indicates that this ad is based on “The information on the website you were viewing” but does not delineate any further what that actually means. Was it because SmartAsset is specifically targeting users who are reading reddit.com/r/meirl ? Or maybe they are placing ads on websites showing funny comments and jokes? Or is it because reddit is gathering data on our browsing patterns, feeding it to an ad exchange, and that ad exchange is deciding I am a ripe audience for SmartAsset’s promotional materials?

I will also point out that when I clicked the “Why This Ad?” button, Google shows me a different ad (the one with dark-haired lady) in place of the one I actually saw (gentleman wearing a cowboy hat).

More concerningly, I was watching a youtube video in Incognito mode about eating Spicy Wings, when I got an ad for a drug and alcohol rehab center.

I have never searched for, read, or looked at info for rehab centers, and I’m probably not a target customer, because I do not drink and have never used any drugs, even post-surgery pain killers.

When I tried to find out why I was getting this drug rehab ad, Google was equally mercurial about the ad:

I have no clue as to what Google’s estimate of my interests are in this particular case, and the venerable FHE Health rehab center would probably also not be too happy after paying Google to serve this ad to a specific audience.

How many ads indicate WHY you were shown that ad?

An additional problem with advertising transparency is that many ads simply do not include any indication to the user of why that ad was served to them.

I was curious as to how many Google display ads even contain the “Why This Ad?” info modal. I used the Adalytics chrome extension to record all the Google display ads served through 7-days of regular browsing and online work activity. During this period, I was shown 589 digital ads, of which only 130, or ~22% had the info modal.

Google’s info modal is a part of the Digital Advertising Alliance’s (DAA) YourAdChoices initiative. The DAA has a set of Self-Regulatory Principles about Transparency, Data Use, and Behavioral Advertising, which approximately ~130 adtech companies currently subscribe to.

The fact that ~78% of ads I saw did not have an ad choices info modal icon indicates that adoption of this standard and overall transparency in ad targeting is generally low.

Who benefits from irrelevant ads?

Irrelevant ads harm consumers by wasting their time and data, as well as the brands paying for the ads. Brands suffer directly, through wasted ad spend (on the order of billions of dollars), as well as indirectly, through reputational harm - irrelevant ads have been shown to lower consumers’ opinions of a brand. Lastly, irrelevant ads can harm the reputation of publishers (e.g. news websites), particularly if they serve controversial or misleading ads. Irrelevant ads are thought to be one of the primary drivers of ad-blocker adoptions. One survey found that 77% of individuals wished they had a way to ‘ad-filter’ rather than completely ad block.

Some analyses have found that advertisers waste 94% of every dollar pursuing large quantities of ad impressions, low prices, and behavioral targeting through programmatic digital advertising.

The moral hazard of irrelevant ads lies with middlemen: agencies, ad tech companies, and third party data providers. These companies benefit from selling large volumes of ad impressions, and as long as advertisers are willing to keep paying for impressions, there is no overriding need to improve the relevancy of ads.

If you have ever wondered how effective display ads are in attracting user attention, research by Hubspot shows that the average Click Through Rate (CTR) across all industries is 0.35%, and the average Conversion Rate is 0.89%. In terms of how much money it costs to elicit an action from a potential customer (such as a sale or event registration), the average Cost Per Action (CPA) is $60.76 per display ad.

That is a lot of ad placements and impressions to get one user action.