What is an unreasonable number of times to see the exact same ad in a single day?

A recent Twitter survey asked 337 people this specific question - the majority of respondents indicated they would not want to see the same ad more than five times in a given day. 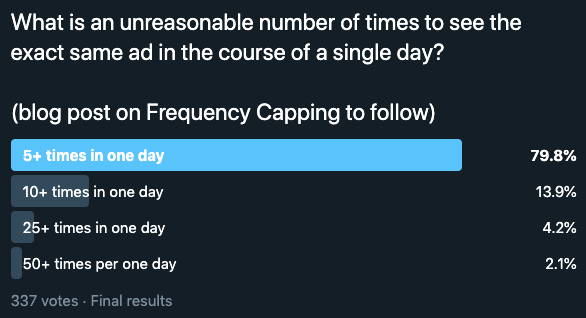 Twitter poll asking users to comment on what is an unreasonable number of times to see the same digital ad during a single day. 79.8% of respondents said 5+ times is too much. Note the poll only allows four options, so it did not ask if 2-5 times was too much.

Despite the small sample size of this casual twitter poll, the results strongly suggest that  consumers do not want to be overwhelmed with the same advertisement over and over.

Different marketing teams may have varying strategies and objectives for growing their customer base. Some may prioritize high reach - getting their message to as many distinct individuals as possible. Others prioritize high frequency - making sure that a subset of potential customers are frequently reminded of a given brand.

In other forms of marketing, such as telephone or email, excessive outreach attempts can lead consumers to block communications from a given source. In digital advertising, consumers are rarely given the freedoms to opt-out of seeing a given ad.

For example, a previous Adalytics analysis showed how one consumer was shown ads from Lending Tree over 2,000 times in the course of a single month. Most of these ads did not have an opt-out button, and even when they did, it did not change how often the user was shown Lending Tree’s ads on various websites.

How often are users ‘overloaded’ with a specific ad?

Several Adalytics browser extension testers shared ad impression data they recorded over the course of 12 weeks of browsing activity. Each of the users had at least one instance where an ad was shown to them more than five times in a single day. 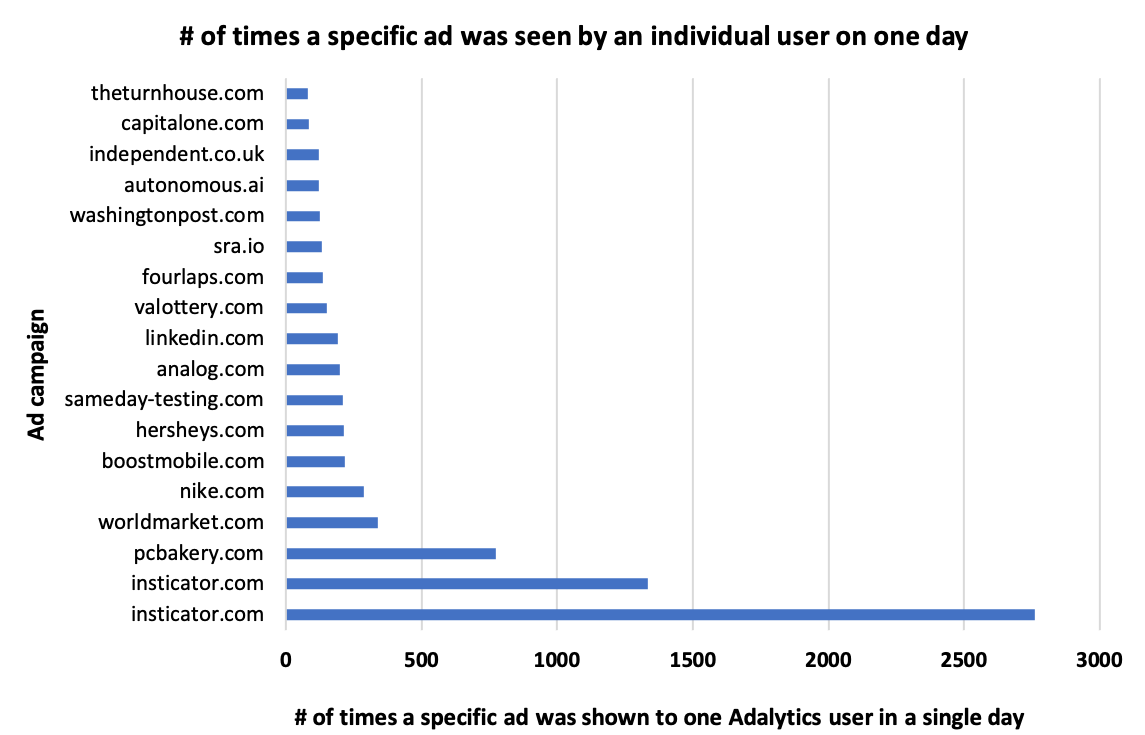 Horizontal bar chart illustrating instances where an individual Adalytics browser extension user was the same ad more than 80 times in a single day. The y-axis shows the clickthrough destination of a specific digital ad. The x-axis show the number of times an ad was shown a single user within a 24 hour period. Two different users reported seeing ads from insticator.com over 1000 times in a single day.

The washingtonpost.com and independent.co.uk ads frequencies are not uncommon. In these cases, publishers are running ads linking to their own podcasts or sponsored reports hosted on their own websites - e.g. an ad for a sponsored Washington Post report will appear on the landing page of washingtonpost.com every time a user opens that website.

However, some of the other examples may warrant further scrutiny. The professional social media network Linkedin is running a digital marketing campaign promoting its own business marketing solutions. A single Adalytics user was shown Linkedin’s ads 419 times in a ~90 day window, and 193 of those impressions occurred on a single day in February 2021.

Major consumer brands, like Nike and Hershey’s were also observed serving many ads to an individual user on a single calendar day. Nike’s ads were shown 286 times to a single user on a specific day.

👉  Do you like this research? Keep track of what ads you are shown and participate in crowd-sourced ad tech research: sign up for the Adalytics browser extension.

Even if a given advertiser desires a large number of touchpoints to shepherd potential customers down their marketing funnel, there are still important reasons to be vigilant about ad frequency capping.

One of the Adalytics users who was shown large numbers of ads from insticator.com was surprised to see that 2762 of those ad impressions came on a single day. This user said they could not initially recall seeing any of those ads. Upon closer inspection, they realized that all of the ads were shown on a specific publisher website that was left open in a Chrome window in the background. This window was open for a 10 hour window in the middle of the workday. This specific publisher was rotating ads within approximately 15 second intervals, leading to a large number of insticator.com (and other brand) ads to load within that 10 hour period on a single day.

This user also read an article from the same publisher site a few weeks later, and similarly left a tab open for 43 minutes. During those 43 minutes, they were shown 82 ads from theturnhouse.com, a standalone, local restaurant in Maryland. They did not recall seeing any of these small business’ ads.

Some commentators who work in ad operations have noted that the marketer is charged for each time an ad load as a distinct impression (i.e. if there are new ad requests being made over the network console to securepubads.g.doubleclick.net/gampad/ads) even if it represents a single user session on one tab with no page refreshes or navigation.

In the case of this specific publisher, a further inspection revealed that their website had code to asynchronously auto-refresh ad slots. According to the Google Publisher Tag documentation, invoking this command “fetches and displays new ads for specific or all slots on the page”. 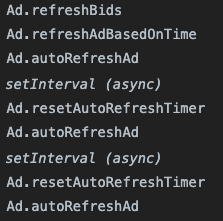 Screenshot of Javascript code on a publisher website, which refreshes ad slots on a website approximately every 30 seconds. 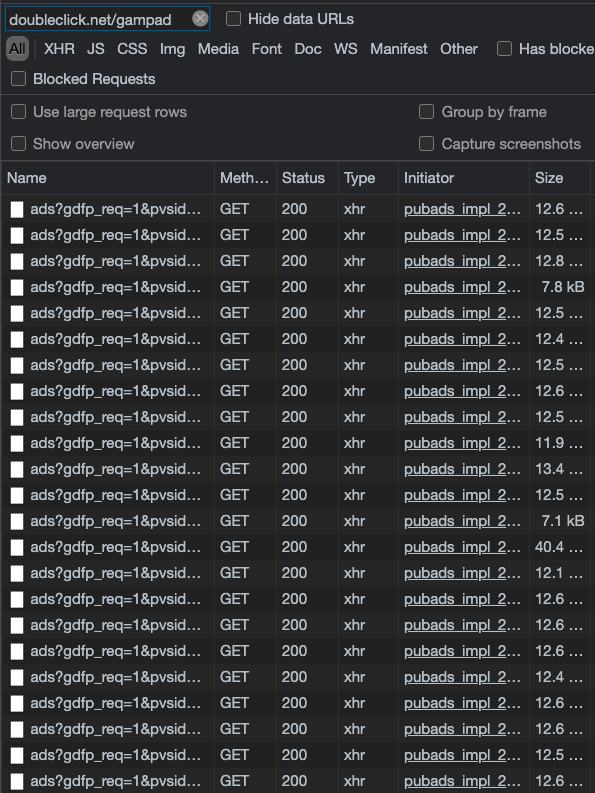 Similarly, the user who saw a large number of Virginia Lottery ads (valottery.com), did so on a website that had Javascript code for refreshing ads by repeatedly invoking the “refresh” function on the site’s Google Publisher Tag.

Screenshot showing Javascript code from a premium lifestyle and culture publisher that refreshes ad slots via its Google Publisher Tag.

One ad tech commentator made two points about websites that auto refresh ads: “If a website is refreshing ads every 15 seconds, they are probably marked as ‘site which abuses refresh’ by some exchanges, and outright blacklisted by others.” The user further surmised, “This makes their traffic worthless” and described these publishers as “bottom feeders”.

The data from this analysis would contradict these two points. Three of the aforementioned websites are in the top Alexa 10,000 most popular websites, with one of them in the top 1,000 most popular websites on the internet. The two political news sites have very high rankings on both News Guard and Media Bias Fact Check. These publishers also work with reputable Supply-Side Platforms (SSPs), such as TripleLift. Inspection of header bidding data from one of these websites shows that they attract relatively reasonable ad bids. 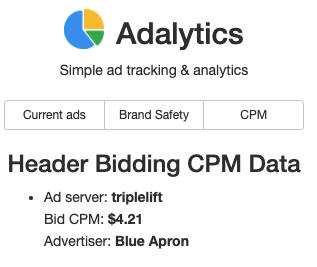 Screenshot of the Adalytics browser extension from a publisher site that does ad rotation. This publisher works with reputable SSPs, such as TripleLift, and attracts CPMs of $4.21 even on weekends.

👉  Do you like this research? Keep track of what ads you are shown and participate in crowd-sourced ad tech research: sign up for the Adalytics browser extension.

Frequency capping and ad auditing is an issue that should be at the forefront of both big and small advertisers’ minds. In this analysis, we examined an apparent lack of frequency capping in ads from a national financial services provider, Linkedin business marketing solutions, international consumer brands, an ad tech startup, and a small restaurant.

While there may be valid reasons for marketers to desire multiple touchpoints with their target audiences, abnormally high levels of ad impressions can lead to wasted budgets or negative perceptions from consumers. In many of the extreme examples identified in this study, consumers did not even remember seeing specific ads.

Before commencing a campaign, advertisers should make sure their campaigns have appropriate frequency caps set. If a brand is relying on an intermediary, such as a media agency, they should include these details in their initial contract negotiations.

It is also important that brands independently verify whether ad tech platforms faithfully execute frequency caps. A recent analysis used customized analytics and client-side fingerprinting to show that a specific ad tech platform was not honoring the requested frequency caps whatsoever. For example, the analysis found that a specific user was shown the marketer’s ads 222 times in the course of a few days, despite him configuring a lifetime frequency cap of 1.

In light of this, marketers and their media agencies should also audit their ad campaigns ex post facto to verify whether their configured parameters are being honored by DSPs, publishers, ad exchanges, and other ad tech intermediaries.